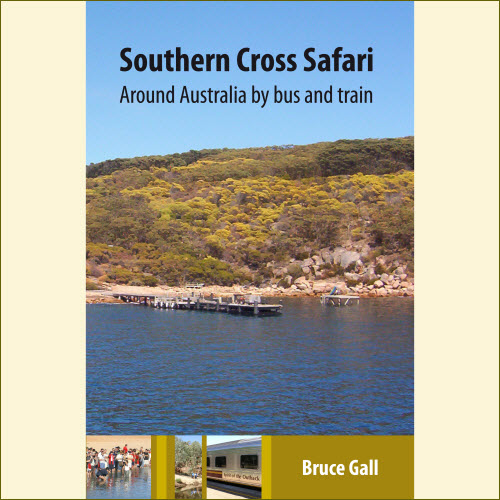 Around Australia by bus and train

In Southern Cross Safari, author Bruce Gall takes the reader on a 26,000-kilometre (16,000-mile) bus and train trip around Australia. He explores the nature of the country, its fascinating wildlife and stunning landscapes.

The author travels like Paul Theroux, with Bill Bryson’s sense of humour, but tells his own story, crafting meticulous word pictures, delightful dialogue and humorous anecdotes that will entertain to the very last page — vicarious travelling at its best.

Bruce has now completed the online ‘trip companion’ for his book. View the photographic story of his travels here.

Bruce Gall grew up in Sydney, Australia. After graduating from university in agricultural science, he worked as a park ranger in Ku-ring-gai Chase, Kosciuszko and Sturt National Parks. He then completed a master’s degree in ecology, and worked as a wildlife research officer, studying koalas and conducting fauna surveys in southern New South Wales.Bruce then returned to park management, becoming Superintendent of Australia’s largest national park, the world heritage listed Kakadu National Park in the Northern Territory. After six years at Kakadu, he relocated to Canberra as Manager of the ACT Conservation and Wildlife Unit. From here he moved to Brisbane, taking up the position of Director of the Queensland National Parks and Wildlife Service. He is a current member of the World Commission on Protected Areas.

This site uses Akismet to reduce spam. Learn how your comment data is processed.